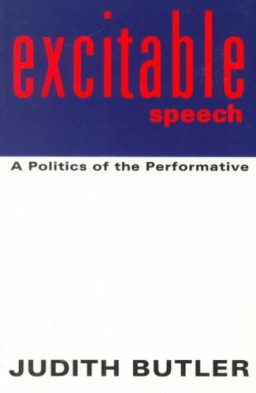 “When we claim to have been injured by language, what kind of claim do we make?

We ascribe an agency to language, a power to injure, and position ourselves as the objects of its injurious trajectory. We claim that language acts, and acts against us, and the claim we make is a further instance of language, one which seeks to arrest the force of the prior instance.

Thus, we exercise the force of language even as we seek to counter its force, caught up in a bind that no act of censorship can undo.”

— Judith Butler, Excitable Speech: A Politics of the Performative

In recent days, a great deal of thought, and even more raw emotion, has been generated by the topic of rhetoric — rhetoric about politics, about race and culture, about identity and belonging, and about exclusion and distrust. I think now, more than ever, we as a society are confronted with the power — the potentially abusive power — of language.

And yet, when considering the power language has to wound, I cannot help recalling Judith Butler’s assertion, in Excitable Speech, of the paradoxical nature of language’s power — that in trying to curtail the power of language, we inadvertently accede to it. Then again, in accepting the power language has over us, we can likewise recognize it as a power we can wield. Though the book is now creeping up on its twentieth anniversary, it seems more relevant than ever to remember both the warning and the promise it contains.

Judith Butler is perhaps the most important living intellectual. She has contributed an impressive and influential body of work to feminist and gender studies, literary  and cultural studies, political philosophy, philosophy of language, and poststructuralist theory. Her work is incisive, open-minded, and inspiring. Rarely have I felt the passion for critical theory that I experience when reading her books.

Excitable Speech is not, I admit, my favorite among her publications, but it is a book I often recommend. Published in 1997, it takes as the subject of its critique some of the most debated topics of my lifetime, and concretizes the philosophy of language in an analysis of familiar social, cultural, and legal issues.

As the quote above suggests, Excitable Speech is concerned with the way that our society approaches different acts of speech that seem to have some kind of agency, some kind of creative or destructive power. It examines the different ways that we as a society have chosen to (or not to) regulate such speech acts. Butler cites, on the one had, the state’s elaboration of the right to free speech when the Supreme Court struck down St. Paul, Minnesota’s Bias-Motivated Crime Ordinance in R.A.V. v. St. Paul (1992), and on the other the act of censorship the state itself enforced through prohibiting the declaration of sexual orientation in the context of the military’s “Don’t ask, don’t tell” policy.

In brief, Butler demonstrates that the way we choose to regulate speech is deeply implicated in social norms, in ways that have profound implications on our individual conceptions of our own identities and our place in society. She points out that “[t]he question is not what it is I will be able to say, but what will constitute the domain of the sayable within which I begin to speak at all” (133). That is to say that the refusal, for example, to allow a declaration of homosexual orientation–to make homosexuality unspeakable–is, at its root, a repression and a denial of the existence of that identity that the speaker would take on by declaring him/herself, and by means of which declaration s/he would ally him/herself with a community that shared that identity.  By making homosexuality unspeakable, the policy made it, de facto, an impossible identity–at least, it was impossible for one’s identity to include both “gay” and “military” (or “patriot” and “hero”, by extension) at the same time. And this isn’t only an existential problem. In very real terms, the push for reform of the military policy towards homosexuality was certainly limited by that fact that the people most concerned with reform–the people directly affected–could not work together for reform on a large scale, because they were disallowed from declaring themselves, and thus from identifying each other.

Most fascinating, I think, is Butler’s response to the debate on the censorship of pornography. Though a feminist author herself (though what does that even mean–there are so many different kinds of feminism), Butler critiques the insistence of some feminists on censorship (focusing on the work of Catherine McKinnon). This is not to say that she believes pornography should not be censored; she takes no clear position either way (though she tends to be skeptical of censorship generally), and certainly she is not an advocate of pornography. Her critique is, in fact, based on a concern that the response of some feminists to pornography tacitly attributes to it a power which we should not grant it.  She argues:

“[P]ornography neither represents nor constitutes what women are, but offers an allegory of masculine willfulness and feminine submission (although these are clearly not its only themes), one which repeatedly and anxiously rehearses its own unrealizability. Indeed, one might argue that pornography depicts impossible and uninhabitable  positions, compensatory fantasies that continually reproduce a rift between those positions and the ones that belong to the domain of social reality. Indeed, one might suggest that pornography is the text of gender’s unreality, the impossible norms by which it is compelled, and in the face of which it perpetually fails.” (68)

In a nutshell, pornography’s obsessive insistence on, say, male dominance in fact reveals the extent to which men feel threatened, disempowered, insecure; the pornographic image is alluring insofar as it projects a stable, clearly defined set of gender roles and gendered subject positions–as well as gendered power dynamic–that remains inaccessible in reality, and therefore becomes the subject of anxious desire. (In the same way, we might recognize racist and xenophobic speech as likewise referencing the unrealizability of the imaginary racial relations and subject positions that it continually asserts.)

She argues that censorship of pornography will not eradicate this desire, nor will it address the underlying issues of gender inequality. Instead, she calls for “a feminist reading of pornography that resists the literalization of this imaginary scene, one which reads it instead for the incommensurabilities between gender norms and practices that it seems compelled to repeat without resolution” (69). She reminds us that “what pornography delivers is what it recites and exaggerates from the resources of compensatory gender norms, a text of insistent and faulty imaginary relations that will not disappear with the abolition of the offending text, the text that remains for feminist criticism relentlessly to read. To read such texts against themselves is to concede that the performativity of the text is not under sovereign control. On the contrary, if the text acts once, it can act again, and possibly against its prior act” (69).

My interest here is in the empowering element of creation that Butler locates in the performance of the speech act. This creative element is the core of Butler’s theory of excitable speech: “In the law, ‘excitable’ utterances are those made under duress, usually confessions that cannot be used in court because they do not reflect the balanced mental state of the utterer. My presumption is that speech is always in some ways out of our control” (15). It refers to the fact that speech acts can often have surprising and unintended consequences, which engenders the possibility to creatively reconstitute the rhetorical landscape that constitutes our understanding of our world and our society.

By speaking, by writing, by acting, by publishing, we participate in the continued creation and recreation of our world, our value-systems, our reality. We draw on the materials of our world, but we refashion them in unique and unexpected ways that could only have come from us. And then we send them out into the world, for others to do with them as they will, but always in interaction, in dialogue, with our own rhetorical interventions.

In short, at a time when many feel victimized by language, by rhetoric, my response is to remember that I have the power to speak back. And, perhaps even more importantly, I have the power to speak forward — to use this crisis moment as an opportunity to engage my students in reflection on the importance of producing and consuming language effectively, critically, and ethically.